Lucky me!  A couple of weeks ago I was asked to be on a Children’s Literary Panel Discussion for IWOSC (Independent Writers of Southern California).  I was excited to participate and looked forward to sharing what I have gleaned from going to numerous children’s writing events as well as my own writing journey.  This is what the email announcement looked like…

Date:  Monday, October 28, 7:30 to 9 p.m. (networking follows the program)
Literature for children is meant to inform, entertain, stimulate and grow future readers, as well as promote family interaction.  This is quite a responsibility, a highly competitive field where immense imagination and mature child-like properties combined with a good business plan, plenty of energy, and an openness to possibilities.
We will trace the journeys of a few published writers of children’s literature and mid-range (for ages 2-11), and one on the way to becoming published, plus a representative from a children’s bookstore.
We will cover:
– Marketing
– Graphic choices
– Mainstream vs. self-publishing
– Use of multimedia (iPad, etc.)
– Alternative ways of selling (Internet, clubs, services, direct)
OUR PANEL:

ANTOINETTE PORTIS made her picture-book debut with the best-selling “Not A Box,” an American Library Association Seuss Geisel Honor book, and one of the New York Times Ten Best Illustrated Books of the Year. She was a recipient of a 2010 Sendak Fellowship. Antoinette graduated from UCLA with an art degree, then worked in advertising and graphic design. She was a creative director, then a VP, at Disney before she bolted to do what she had always wanted: be alone in a room making picture books. She lives in Los Angeles. “Froodle,” her newest book, comes out in Spring 2014. www.AntoinettePortis.com
SARAH MAIZES is an author, blogger, comedian, and freelance writer.  She has appeared on “The Today Show,” CNN, KTLA, and NPR, and is a regular contributor to “TODAYMoms.com,” “The Huffington Post,” and “CBS Los Angeles.”    She is the author of several humor books and three children’s picture books including “On My Way to the Bath,” a Children’s Book of the Month Club Main Selection and a Children’s Book Council “Best Picture Book of 2012.” Its upcoming sequel, “On My Way to Bed,” was a New York Times Bookshelf “Pick”; the third book in the series, “On My Way to School,” is due out in 2014.  For more information (or just giggles), check out her website, www.SarahMaizes.com , or FOLLOW HER on Facebook at http://www.facebook.com/ SarahMaizes and on twitter @SarahMaizes.
LUCY RAVITCH is a picture book writer and mother of five.  With a background in teaching, she has immersed herself in the children’s literature market over the last four years by attending numerous conferences with kid-lit agents, editors, and authors.  Lucy is a member of Society of Children’s Book Writers and Illustrators (SCBWI) and the Vice President of Children’s Book Writers of Los Angeles (CBW-LA).  Lucy also makes time to blog at kidsmathteacher.com where she shares her love of learning. Children’s Book Writers-LA has an anthology that is launching November 2nd, which includes two writing pieces of Lucy’s.  www.facebook.com/Author. LucyRavitch

ANN REDISCH STAMPLER is the author of the young adult novels “Afterparty” (Simon Pulse, January 2014) and “Where It Began” (Simon Pulse, 2012), described by Publishers Weekly as “a searing portrayal of power, privilege, and betrayal in the hills above Los Angeles.”  Her award-winning picture books include “The Rooster Prince of Breslov” (Clarion, 2010) and “The Wooden Sword” (Albert Whitman, 2012), a folktale from Afghanistan.  Ann lives in Los Angeles with her husband and rescue dog, whose tendency to eat pieces of handwritten rough drafts does not exactly facilitate the writing process.  www.annstampler.com .
MODERATOR:
SANJAY NAMBIAR has written several award-winning books, including “The Super Duper Princess Heroes: How It All Started,” “Maybe (A Little Zen for Little Ones),” “Still There? (A Little Zen for Little Ones),” and “Remember the Stars (A Little Zen for Little Ones).” Through his books, he hopes to inspire readers and convey positive messages to kids. Sanjay grew up in Carson, Calif., where he overcame a gang- and drug-riddled environment with the help of a closely knit family and a focus on education. He graduated with honors from UC Berkeley, with degrees in Economics and Neurobiology, and earned an MBA from UCLA. Sanjay now is a freelance copywriter and lives with his wife and endlessly energetic identical twin daughters in Los Angeles, where he sometimes bemoans the monotony of the pleasant weather. 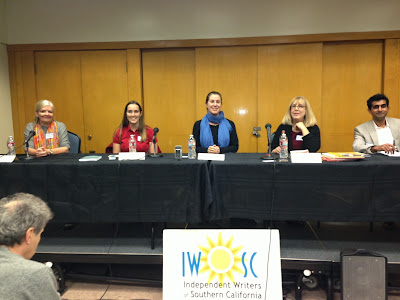 It was great!  I find it fascinating to hear every writer’s experience.  Don’t we all have a story to tell?!  I found everyones comments insightful and very supportive.  Afterwards Ann, Sarah, Antoinette, and I talked about the possibility of starting a site for authors to collaborate and swap stories.  Wouldn’t it be fun to have two or three authors go on a school visit?  I’m looking forward to my association with these lovely ladies.  Sanjay was also an inspiration too (I couldn’t imagine orchestrating all the marketing for my book, but he seems to have a good handle on it).

It was a great experience and I hope some of the people that took pictures send me a copy : )  Thanks for all the people that came and everyone that supports picture books and children’s literature!