Hello!  Sorry I am a bit late in posting.  Today for MaTh activity Thursday I will be focusing on subtraction. 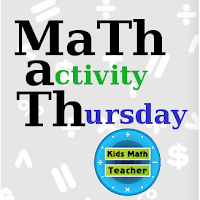 Whenever I think about subtraction, I think of action.  Things being reduced takes action on someones part.  Just think of these situations.
If you feel a child is ready you can also introduce the concept of negative numbers (this can be as early as about four years old)…
My activity suggestion is to have a
Subtraction Scavenger Hunt.

I would love to hear how this activity goes for you and if the kids have fun.  It could even be homework.

On Saturday I’ll be having a guest blogger here.  Be sure to come back and check it out : )  And remember to link up any of your math blog posts : )