Recently on Google+ I was reading through my Community pages (I have an Elementary School Teachers Community by the way that anyone who wants to join can be part of) and there was an article shared on one of the math teachers community about how important number lines are.  Kids often don’t have a good sense of numbers and their placement. 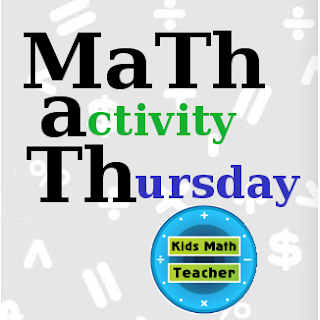 I thought I would throw out a few ideas to do with number lines.  Number lines help kids visualize which numbers are closest to zero, higher or lower than each other, and the placement of where numbers fit along the line.

Many times in school we are only supposed to teach the positive numbers, but I know my own children always wondered if there were numbers going the other way.  We shouldn’t be hesitant to show them that indeed there are negatives.  When we teach a subtraction problem we can show them that there is a negative in there.  5-2=3 is also 5+(-2)=3.

In college I had an amazing math instructor that taught us how to teach higher level math to young children in simple ways.  He did a demonstration in a second grade class with poker chips.  The red chips were hot chips and the blue chips were cold chips.  He used a thermometer drawing to show how the temperature would go up or down according to the chips the kids were given.  The thermometer was basically a number line in the vertical position.

At first the instructor gave the 2nd graders more hot chips.  For example: one student got 9 hot and another student got 2 cold.  What’s the temperature?  The kids figured out it was 7.  But after a few of those, he gave more cold chips: 5 hot chips and 10 cold chips.  Guess what?  They figured out it was -5!  You should have seen how the kids were so excited to know they could go below zero!

So, that’s one activity you could do with your students.  I would love to hear if they get as excited as the kids in that second grade class.

For today, I made a small freebie which is one page out of a packet I am made.  I’m giving away the black and white copy of the Lilly Pad Number Line!

With the number lines, the kids fill in the numbers on the Lilly pads and they can do some different things with them after they are cut into strips and made into a long horizontal line.  Here are some ideas…

What other things do you do with number lines in the classroom?